Making sure the code base is consistent across all development teams, championing best practices and design strategies. Introducing new ways to make developers' lives easier by procuring tools for all aspects of code health, security and performance. Architecture and prototyping of micro-services with the long term goal of splitting up code into more manageable and testable pieces.

Maintenance of the identity and access management systems responsible for providing systems accesses for the entire organization. Development of solutions for those same systems.

Ruby on Rails platform to manage the cultural and sports group of a major Portuguese bank (BPI);

Development of a dropzone management software application, to handle schedules and passenger manifest at any parachuting operations site;

Development of other custom-made software applications and websites.

Maintaining the old map shop release system and PND content server (i.e. home server) and working on developing the next generation of the same products.

Short stop through the Mobile department. Though only a month, this project provided some insight on location based services, namely routing and geocoding of addresses, and development on mobile platforms (Midlets). Went back to the old department due to some company internal project restructuring.

One of the original developers of TomTom MapShare technology's back end server. This system is responsible for the storage, processing, and distribution of map and POI (points of interest) corrections to it's more than 20 million users. This was TomTom's most important project in 2007.

Adopting the Scrum agile methodology from the start, was responsible for the design and implementation of the entire solution (backend server and a web interface where TomTom content moderators can manage incoming corrections), along with 2 other team members.

As with all server-side projects, the solution had to tackle the usual performance and scalability challenges, as well as the immense amounts of handled data. The answers to these issues were translated into the following:

Was also responsible for the creation of other smaller tools (testing, load/stress runs, etc.), some Python scripts for performance measurement and charting of results, and a maven plugin for the generation of a SQL schema from Hibernate annotations.

Sole responsible for the design and implementation of a data aggregation and reporting tool for the MapShare backend server's data. This project was born from the management's need to monitor and get information about the current status of the project, namely the number of users sharing corrections, what kind of devices are sharing data, how much data is being shared, what type of corrections are more common, etc.

This tool consisted on scheduled data aggregators, that retrieved information from the live MapShare system and stored it in a processed/aggregated form, and a web interface - where management could see the aggregated data and generate Excel reports from it.

In the same team that developed MapShare, was responsible for the design and implementation of a new (web) version of the TomTom safety cameras moderation tool. This tool allows TomTom content moderators to manage safety (speed) camera information, basically deciding what will end up in user's devices.

This project relied intensively on Ajax, around an openlayers map interface, when moderators could view, change, import, and export information on safety cameras that was previously gathered from several sources.

One of the developers responsible for the redesign of the home banking website of one of the company’s clients (Santander/Totta Bank). This included new features, according to new services offered by the bank to its customers, a new web layout, and the integration with an existing CMS.

Also responsible for the development of a new web application, targeting customer investments - for both home users and companies. The development of this application included integration with one of Infosistema’s core products, a connector to retrieve stock quotes from Reuters.

One of the three core developers of the Republic of Angola’s voting census software applications, put into production in November of 2006. More than 7.5 million of Angola’s inhabitants registered themselves using the new electronic census framework.

Other software applications developed included one to allow an Angolan province’s govern (Huila) to keep a register of the region’s farms and crops, as well as some other in-house software products.

Design and implementation of a website for the Social Centre of Palmela (http://www.cspalmela.org), a non-profit social care institution, comprised of several child-oriented services, for children older than 3 months, like hobby workshops, psychological support, etc.

The PHP content management system Joomla (previously known as Mambo) was used for the implementation of the website ( http://www.joomla.org).

The final year project consisted in the creation of an ORPGs (On-line Role Playing Games) development framework. Also, a paper about the idea was submitted (and accepted), and a poster was presented, at the Level Up 2003 conference (International Conference on Digital Games Research) in Utrecht, the Netherlands. This project achieved a final score of 17 (0-20).

Final year project for the BsC in Computer Science Engineering, which consisted in the creation of a virtual community, for Portuguese martial artists, and all required services like news, events, discussion forums, information directories, etc. This project achieved a score of 20 (0-20).

Founding member of this research group from the Escola Superior de Tecnologia de Setúbal school, having developed several projects, including the new group website (no longer online), the creation of a website for the Naval Club of Lisboa and the development of a support platform for the group teachers. 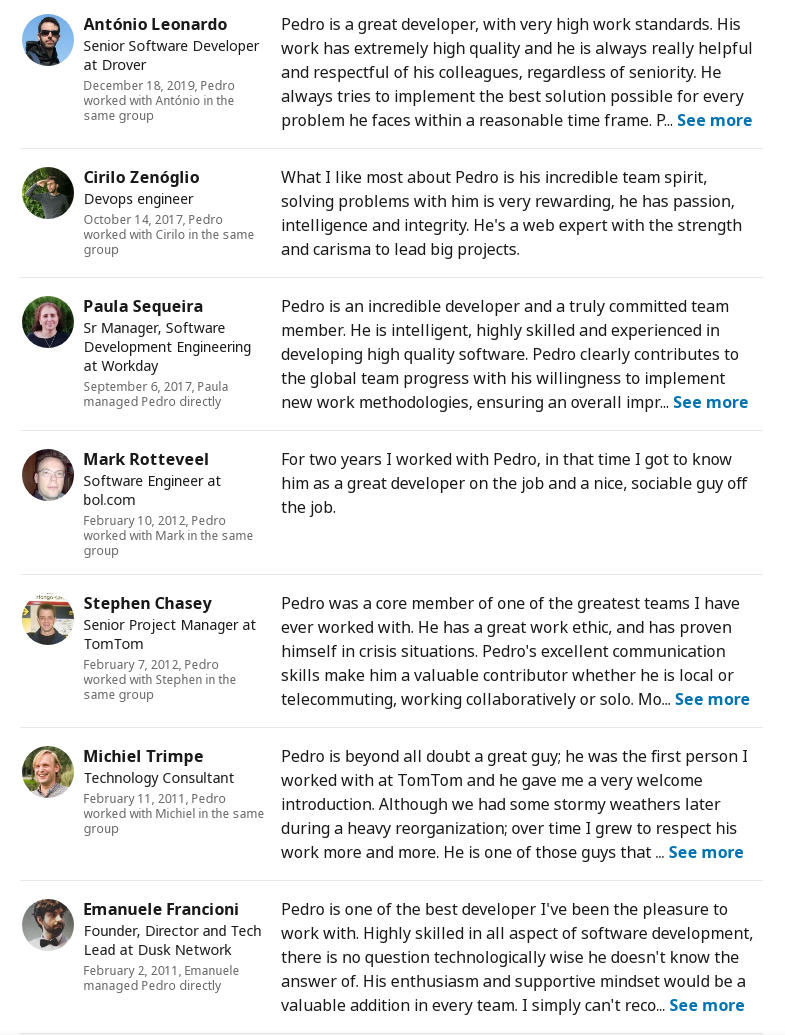